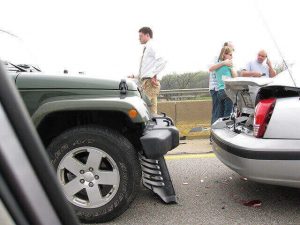 Police were called to the scene around 3:21 p.m. on State Route 65. A silver Lexus and a second vehicle were involved in the crash. The Lexus careened off the roadway and crashed into a tree following the incident.

Police found that only one person sustained injuries due to the collision. However, the extent of their injuries is not known other than the fact that an ambulance was called to the scene to offer aid.

Police continue to investigate the incident.

Car accidents take on many forms, from those that involve a side-collision to those that happen when a car strikes from behind. Many people think the injuries that come with rear-end collisions are not serious in nature but this is a misconception because it is possible to sustain extremely traumatic injuries in these cases. You are not only limited to whiplash but also broken bones, traumatic brain injuries, and more.

It is important to act quickly when you have been injured in a car accident claim so that you can retain your rights during this difficult time. We want to help you work toward the compensation you deserve at the Los Angeles Injury Group. Call us for more information at 310-954-7248.