Workplace Shooting In Bakersfield Causes Concern In The Rest Of California

A lovers’ quarrel in Bakersfield earlier this month may have been the cause of a bloody rampage at a trucking company that tragically left six people dead and many others were left wondering why such a tragedy could happen in the first place. Bakersfield officials haven’t yet confirmed a motive for the initial attack, but have said that the incident appeared to be a “domestic violence tragedy.”

Shootings in the Work Place

A fully armed person targeting folks in the workplace is a horrifying nightmare that has unfortunately become an everyday occurrence. Many offices have plans in place for such a tragedy, but even the best, most detailed security program can’t anticipate every possible threat. Workplace shootings are often perpetrated by people that everyone at the workplace knows, so a threat isn’t initially taken seriously.  This gives the perpetrator more time to cause real damage before most folks in the workplace know what is going on.

To prepare for the unlikely event of such an attack, employers must give their employees proper training. Employers should conduct live drills that incorporate simulated gunfire in order to create a mental map of how to respond to stress, say law enforcement officials. The human reaction is to fight, to flee, or to freeze in place and many people simply freeze because that’s the natural human reaction. Officials want employees to try and forget that freezing response. 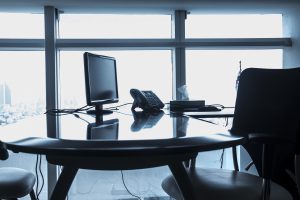 An instant communication system should also be in place to alert all employees as to what is happening, according to many security officials. This system should be able to alert all employee devices at once (phones, email, text, etc.) and give the location of the active shooter so that employees and visitors can decide if they have time to get out of the office, or if they will have to shelter in place.

Law enforcement officials also say that it’s vital during an active shooting incident to fortify your own area, barricade, create a secure area, and take back control. The potential victims always have the advantage of numbers. In 98% of the active shooting incidents since the University of Texas Clock Tower tragedy in 1966, there has been a single gunman, which means that the good guys (i.e. everyone else in the area) greatly outnumber the perpetrator.

Therefore, it’s crucial that everyone try to shorten the time that the gunman is in control. Often, this is easier said than done. Proactive defense is often physically easy, but mentally it’s tough. It requires more than just watching a video in a conference room. It requires repeated training to get knowledge and confidence in one’s skill set.

Security officials emphasize that the resiliency of a company in a threatening situation is dependent on prepared and confident employees. But Los Angeles Injury Group understands how life-changing workplace violence can be. Therefore, we do everything within our power to best assist victims of workplace violence in getting the compensation they deserve.

We believe our clients should receive payment for any damages and losses they’ve suffered. If you, or someone you love, received injuries or were killed in a workplace violence situation, give us a call (310) 954-7248.