Who is Responsible for Children Injured in a School Bus Crash?

Sending your children off to school in this day and age comes with no shortage of things to be frightened of. Disenfranchised educators, bullies, and school shooters are some of the terrors that dominate our country’s news reports. A very real and often overlooked danger is the bus ride millions of children take to and from school every single day.

Not only do these bright yellow behemoths not offer seat belts or any other physical restraints, but they can also be very overcrowded. Sometimes they operate at such a full capacity there isn’t even a seat for each child, forcing some children to stand in the aisles. The driver must also be taken into account. Whether or not they have significant experience driving a bus, what mood they are in, and how well rested they are are all factors that come into play regarding the safety of the children on board. 23.5 million children ride a school bus at least once each day according to School Transportation News. 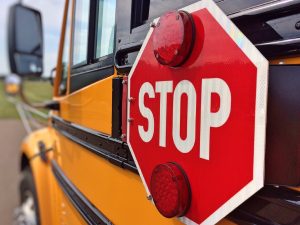 Each year approximately 17,000 children are injured on or waiting for the school bus, and of those 17,000 injuries, 40% of them occur in bus accidents. If your child was injured in an accident involving their school bus the best thing you can do is to contact an accident attorney as soon as possible.

This is often the most difficult part of the lawsuit, determining exactly whose fault the accident was. The school bus driver could be liable if it is determined they were careless or acted in an unsafe manner. Likewise, instead of holding the driver responsible the school district itself could be open to a potential lawsuit.

These accidents can just as easily be the fault of another driver on the road. A driver not stopping for a school bus with its flashers on and stop sign out, or attempting to illegally pass a school bus would be deemed liable if an accident somehow resulted from those instances. Finally, there is also the issue of defective parts.

If the school district unknowingly used a mechanic who attempted to save money by signing off on cheap equipment it knew to be faulty, then the bus driver would not be responsible for an accident in which the bus could not break in time.

In order to accurately determine liability, it is important that the scene of the accident be thoroughly documented. This means in pictures as well as in the written statements of those involved and of those present. Police need to be called to the scene to investigate the accident and file their reports and findings as well.

Once liability is determined it will then be possible to proceed with a claim so that damages can be collected on behalf of the injured party and the family can begin to heal. An experienced, reliable accident attorney will be able to help determine which party should be the object of the lawsuit: the driver or the school district.

In a study conducted by the National Highway Traffic Safety Administration, an average of 19 children die each year in school bus accidents. If you or someone you care about has a child that has been injured or killed while they were on a school bus, it is imperative that you hire an accident attorney immediately.

Building your case from the ground up is something the accident attorneys here at the Los Angeles Injury Group are well versed in doing. Let us investigate the accident and help you file the proper legal paperwork while you focus on your family. If you would like a free consultation with one of our accident attorneys, please give us a call today at (310) 954-7248.