What Is Negligence In A Car Accident In California?

California traffic fatalities increased by 7% from 2015 to 2016. That’s an increase of about 3oo more people dying on the road in car accidents.

Why are there so many traffic accidents in California?

Well, in California alone, there are an estimated 27,136,792 licensed drivers out of the estimated U.S. population of 327.2 million, meaning 7% of the population are on the roads in California. It goes without saying, but the roads can get pretty cramped. It’s a sheer numbers problem that causes the number of accidents that happen in California.

But, there’s one more cause of accidents in California, and that is negligence.

Negligence occurs when one of the parties involved in the accident behaves thoughtlessly or is careless in their driving, which, in turn, leads to a car accident.

Essentially, negligence is where the blame of an accident goes. The negligent party can be the other driver in the accident or can involve other outside parties, such as an equipment manufacturer.

Any personal injury lawsuits that crop up after an accident will focus on determining who exactly was behaving negligently and is at fault.

If you do find yourself in a car accident in California, you owe it to yourself to get in touch with a group of experienced Los Angeles lawyers. You will need all the legal guidance you can get when navigating a personal injury lawsuit, especially in proving beyond a shadow of a doubt who was the negligent party in the accident.

Our California personal injury lawyers will guide you through any lawsuit.

In the meantime, learning the specifics of negligent behavior outlined below will help you avoid any risky behaviors on the road.

What Is Negligent Behavior? 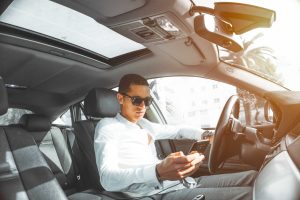 Our attention is constantly being yanked from opposite ends – from the world right in front of your face and from the world that exists inside of your cellphone.

Your smartphone is an open door to distractions, a loudspeaker of pings from text messages, phone calls, social media alerts, emails, news story updates; the possibility of distractions are endless.

It might seem harmless, but it’s certainly not. Any act that takes your hands from the steering wheel and your eyes from the road is endangering your life and the lives of those around you.

The best thing you can do for yourself is to turn your cellphone off while driving. Your cellphone will still be waiting for you when you’re done driving.

Since life moves so fast, you might feel you’ve got no time to even eat in the morning. You might take your piping cup of coffee and a bagel on the road with you, eat with one hand while steering with the other.

It’s another action that might seem harmless, but it’s actually incredibly dangerous to do while driving. Multitasking of any kind reduces the brain’s ability to focus on the task ahead of it.

Anything that compromises the entirety of mental acuity while driving constitutes negligent behavior.

Another thing that one might try doing while trying, especially if they are taxed for time. One hand on the driving wheel, the other holding a brush.

Another seemingly innocuous action, but one negligent nonetheless.

Instead of rolling the dice with your multitasking skills, putting aside those extra few minutes you need in the morning to groom yourself will save you the risks of negligent driving.

Negligence behind the wheel happens both inside and out of the car.

Driving with disregard for the pre-established rules of the road absolutely constitutes negligent driving.

An accident that happens because one of the drivers involved is speeding, making too-wide of turns on the road, changing lanes without a signal, or making sudden stops all qualify as occurring due to negligence.

If a driver gets in an accident while engaging in one or more of these negligent behaviors, they are very likely to lose a personal injury lawsuit and face legal and financial consequences.

Duty of Care & Breach of Duty

Most cases of negligent driving are attributed to specific actions or decisions made by one of the drivers.

However, failing to meet the standard duty of care counts as negligent driving.

“Duty of care” essentially means that all drivers on the road must give their full vigilance to the act of driving, so they can make any split-second decisions that they need to in order to avoid damages to property or people.

A breach of this duty occurs when a driver fails to meet the duty of care. Even a minute, minuscule breach of duty can lead to an automobile accident, or could even lead to the loss of a life or lives.

How Could Negligence Affect Your Settlement?

Sometimes, who is negligent in an accident might be a little vague and nebulous. It is very likely that, in an accident, more than one driver will share the negligence.

There are two scenarios of multi-driver negligence that can occur.

Comparative negligence occurs when both drivers involved in the accident share in the responsibility.

This can occur in a number of scenarios but essentially boils down to an accident in which both drivers fail to give their due diligence to the act of driving; a simple example of which is a driver speeding in the left lane, and another driver further down the road merging from the right to the left without using their turn signal.

In these kinds of cases, victims will only receive a percentage of their compensation claim, which is determined by how much the victim was at fault for their accident.

This type of negligence occurs when someone is injured in the accident, and it’s determined that the injured party is also partially at fault.

In this case, the injured party might not win any personal injury lawsuit they attempt to undertake.

Deciding what to do after a car accident might seem like a daunting task. This is especially the case if you were involved in an automobile accident caused by another driver’s reckless, negligent behavior.

With years of experiencing dealing with cases like yours, we can give you the legal help you need to get any and all compensation you might be owed.

Our Los Angeles car accident attornies will help get your life back on track.