What Happens If A Dog Bites Someone in California?

Unfortunately, dog bites are quite common and children are especially vulnerable. According to the American Humane Association, children 12 and under represent 50 percent of victims of dog bites. A look at statistics provided by the American Pet Products Association, nearly 90 million dogs are owned as pets in The United States.

These relationships are usually, but not always, loving and tranquil. More than 4.5 million people are bitten by dogs annually in the United States, according to the Centers for Disease Control and Prevention. The CDC says that there were over 300 dog attack deaths between 1979 and 1996, and the bulk of those deaths were children. A study by the Agency for Healthcare Research and Quality found around 316,000 emergency room visits and 9,500 hospitalizations in 2008 were related to dog bites. 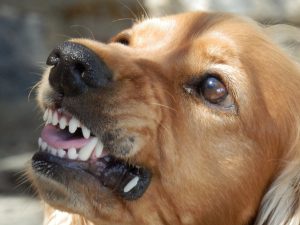 Laws in California regarding dog bites can be complicated, but they generally fall into two categories:  Statutory Law and Common Law.

Section 3342 of California’s Civil Code is California’s dog bite statute. It says that dog owners are liable when their dog bites someone in the state. Because liability is strict, the dog owner cannot defend themselves by claiming they reasonably restrained the animal. They are generally responsible if they own the dog and the dog bit someone.

Dog owners need to know that the dog does not need to have a history of being vicious for the owner to be liable. Even if it’s the first time the dog has ever bitten someone, the owner is on the hook for any injuries sustained.

Dog owners do have some ways to defend themselves. For example, if the victim was found to have been egging the dog on or had been trespassing on the property, the owner may not be responsible.

Common law is a law that is created by judges and court rulings, not by the Legislature. California’s common law regarding dog bites says that owners must use reasonable care to protect other people from their dog. If the owner falls below that reasonable standard, then they may be held liable for any injuries.

Whether an owner has been negligent or not depends on each particular circumstance and how a reasonable person would restrain a dog. If the owner broke a leash law, for example, this may be proof that they were negligent.

Different cities across the state can pass their own laws, and many of them have. These laws might provide greater rights to dog bite victims than either the state statute or the common law. People should consult with an attorney to determine whether a local law applies.

At Los Angeles Injury Group, we understand how serious dog bites can be; therefore, we do everything within our power to best assist our clients in getting everything they deserve. We believe our clients should receive compensation for any damages and losses they’ve suffered. If you, or someone you love, received injuries as a result of a dog bite, call (310) 954-7248.