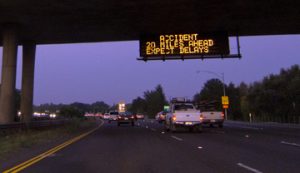 West Covina, CA (August 11, 2018) – A serious rear-end collision on the Interstate 10 Freeway killed one and injured several others on Thursday.

According to police, a 2015 Hyndai Elantra and 2014 Toyota Prius were both traveling eastbound on the highway around 2:00 am Thursday.  For unknown reasons, the Elantra failed to slow down and rear-ended the Prius.  The force of the collision caused the Elantra to end up in another lane while the Prius ended up the roadway shoulder.

A 19 year old man and 18 year old woman who were in the Elantra also suffered major injuries. It is not clear if the first or second crash caused their injuries.

Neither the Prius nor the Tacoma driver were hurt in the crash.

The accident remains under investigation at this time.  Both the Tacoma driver as well as the Prius driver remained on scene and cooperated with police following the crash.

We certainly extend our thoughts and condolences to the family of Irene Aleo.

Sometimes, in crowded areas, the most dangerous part of a car accident is stepping out of your vehicle after the crash.  Especially at night, it can be difficult for oncoming drivers to see people standing in the roadway following a crash.  It is always best to wait for law enforcement to arrive before exiting your vehicle following a crash.

In most cases, a driver who rear ends another driver will be held at fault for the crash.  Many times, the rear-end driver is distracted by something else. This can be a phone or radio which causes them not to slow down for stopped vehicles in front.  Although further investigation must be done, it appears as though the driver of the Prius is responsible for the initial crash in this case.

If you or a loved one have been hurt in a Los Angeles car accident, you should turn to an experienced personal injury attorney.  At the Los Angeles Injury Group, our attorneys help innocent accident victims on a daily basis.