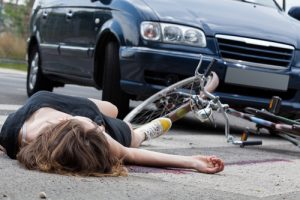 Victorville, CA (July 26, 2018) – A 16 year old girl was struck by a car and injured while riding her bicycle on Wednesday night in Victorville.  The collision happened on Amargosa Road, near Palmdale Road.  At the time of crash, the girl was riding her bicycle on the sidewalk.  Simultaneously, a 2006 Toyota Corolla was exiting a nearby restaurant parking lot.  As the Corolla exited, it struck the bicyclist.   The driver continued on for some distance, dragging the bicyclist underneath the Corolla, before coming to a stop in the turn lane.

Victorville police responded to the incident.  The Corolla driver, identified only as a female, remained on scene to cooperate with the crash investigation. Neither drugs nor alcohol are considered factors in the crash.  The bicyclist suffered road rash and other injuries and was transported to a local hospital for further treatment.

Police are still investigating this crash.  There is no indication at this time on whether the Corolla driver will face any charges.

This bicycle accident is a reminder that drivers must be aware of their surroundings at all times.  In populated areas, a driver must look out for not only other vehicles, but also pedestrians and bicyclists.  It is important to remain alert at all times while behind the wheel.

When a driver violates a traffic law or fails to take reasonable steps to ensure the safety of others they are placing all others at risk.  Where negligence plays a part in a traffic crash, the negligent driver is legally responsible for the injuries suffered as a result.

If you or a loved one have been injured due to the negligence of a driver in Southern California, you should speak with an experienced personal injury attorney.  At the Los Angeles Injury Group, our Los Angeles car accident attorneys handle all types of accident cases, including bicycle accidents.

We want to help you get the compensation you deserve.  We offer free consultations to all accident victims.  If we decide to take your case, there is no fee unless we recover for you.  Please call our office at 310-954-7428 to speak with one of our attorneys today.