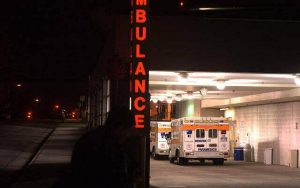 At that time, a purple 2006 Toyota Scion was traveling northbound.  For unknown reasons the Scion drifted into the southbound lanes.  While in the southbound lanes, the Scion struck a 2001 Chevrolet Suburban.  At least one of the vehicles caught fire following the crash.  Police and paramedics were on scene quickly.

It is unknown what might have caused the Scion to drift out of its travel lane.  The cause of this crash remains under investigation.

Further police investigation into this crash will help determine the cause.  At this time, we know that the Scion driver was almost certainly responsible for the crash.  We do not know what caused the driver to leave their lane of travel.

In California, head-on collisions are a major cause of serious and fatal car accidents.    There are many reasons why a driver goes left of center, including impairment, distraction and speeding or losing control of their vehicle.  Whatever the reason, these collisions are typically catastrophic.  Our thoughts are with the deceased victim’s family.  We hope the injured victims recover quickly.

If you have lost a loved one in a Southern California car accident, we want to help. At the Los Angeles Injury Group, our wrongful death attorneys can help your family through this difficult time.