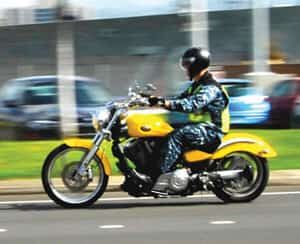 Victorville, CA (August 20, 2018) – On Saturday, a 23-year-old motorcyclist was seriously injured in a traffic collision that happened on the Interstate 15 Freeway in Victorville. Police confirmed that the accident took place around 9:15 p.m.

The motorcyclist, who has not yet been identified, crashed into a man on a bicycle near the entrance of the Freeway at Palmdale Road. Emergency responders came to the scene and the motorcycle rider was quickly transported to the Victor Valley Global Medical Center and then airlifted to another hospital. His condition is not known at this time.

The bicyclist received only minor injuries but declined treatment at the scene. An investigation revealed that the bicyclist was riding in the bike line at the time of the crash. The exact circumstances of the crash are being determined, however.

Motorcyclists are injured in accidents involving other motor vehicles on our roadways every year, but accidents involving both a motorcyclist and bicyclist are not as common. No matter what type of accident you have been involved in, if you have received injuries, you might have rights to compensation you deserve during this difficult time.

Every year, a variety of people will be hospitalized and many will even lose their lives in these accidents, as both motorcyclists and bicyclists have fewer protections on our roadways so they are more likely to incur serious harm in accidents. At the Los Angeles Injury Group, we want to help when you have been injured in an accident and you are unsure of where to turn.