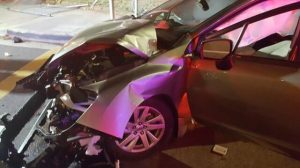 Two Rock, CA (October 3, 2018) – Two people were killed in a serious head-on collision that happened in Two Rock. They have been identified as 66-year-old Carl Levine and 57-year-old James Wheelock.

The accident happened on Monday morning, October 1, along Valley Ford Road. Both men were from Petaluma.

Levine and Wheelock had been driving a Nissan work pickup truck when their vehicle suddenly crashed head-on into a Lexus SUV. The driver of the Lexus was identified as a 72-year-old woman from Sacramento who had been turning left in front of the truck at the time. The accident happened around 11:20 a.m. near the Walker Road intersection.

The Nissan overturned onto its side as a result of the accident. Both Levine and Wheelock were found trapped inside the car and they both passed away due to their injuries. The woman in the Lexus was transported to the hospital with various injuries.

At this time, the collision remains under investigation.

At this time, we wish to extend our sincerest condolences to the families and friends of the two men who lost their lives in this serious accident. Fatal accidents can be a difficult time to go through and you don’t want to handle your case on your own. This is why it is important to have an experienced attorney on your side.

Authorities will take a closer look at the accident scene to determine how fast each party was going, if alcohol or drug use was prevalent, whether or not there were mechanical issues, and more. From there, you will be able to get a better idea of who the at-fault party is and if you can receive compensation for the loss of your loved one during this difficult time in your life.

The surviving family of the deceased has the ability to bring a claim on behalf of their loved one so that they can compensate for a variety of aspects like medical bills, lost wages, funeral costs, and more. At the Los Angeles Injury Group, we will stand by you every step of the way when it comes to your claim. Call us today for more information at 310-954-7248.