San Jose, CA   (October 17, 2018) – The California Highway Patrol reported a man has died as a result of a violent multi-vehicle collision with a Caltrans truck on Highway 101 just south of Brokaw Road. The fatal incident transpired at approximately 10:30 am on Monday morning, October 15.  All of the southbound lanes of traffic had to be closed down while investigators conducted an investigation into was caused the accident to occur. 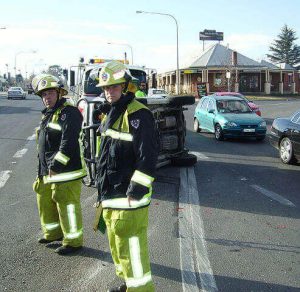 According to investigators, an unidentified man was killed when he collided with a Caltrans truck that was reportedly trailing a street sweeper vehicle on Highway 101. The California Highway Patrol is reporting that the truck traveling southbound on Highway 101 has been identified as a Ford construction pick-up.

The driver of the Ford pick-up was driving between 65 and 70 miles per hour before crashing into the second of the two vehicles. The impact of the collision collapsed a protective barrier, approximately six feet by four feet, on the rear end of the trailing truck. The Ford Pick-up overturned before partially crashing into the roadway, killing the driver. Officials say it appears the deceased driver did not see the street sweeper crew before impact. CHP investigators say the deadly collision that littered the highway with debris occurred in the far left lane, next to the median on southbound Highway 101 in San Jose, in the area of North First Street exit. Following the crash, the  Accident Investigation Team are conducting an investigation into the fatal accident.

Given the circumstances of this accident, officials are still unsure of why the vehicles collided along Highway 101. As part of the ongoing investigation, forensic teams will inspect the Ford and examine photos of the crash site to determine if the accident was due to negligence, or if mechanical issues or system failure contributed to the accident In any way.

We would like to extend our heartfelt condolences to the family members and loved ones of the victim that lost their life in this accident.  We hope that they are able to find some comfort and peace during this most difficult time in their lives.

If you or a loved one is an injured victim of a traffic accident that was caused by the negligence of another party, you may have the right to file a personal injury lawsuit against the negligent party, pending the results of the investigation into your accident. Seeking the help of an experienced lawyer will help you receive the compensation you are entitled to.  Call the Los Angeles Injury Group today to speak with one of our qualified attorneys at 310-954-7248. We offer free consultations. Call us today to discuss your
claim.