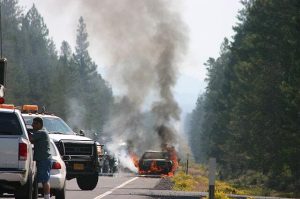 Police arrived near the Governor Drive exit to find that a driver was seen traveling in the wrong direction in a carpool lane at a high rate of speed. The motorist was driving well over 100 mph, according to witnesses.

The speeding car was described as a black Chevy Corvette or Lamborghini. It struck another vehicle head-on. Police said that, in total, eight vehicles and a motorcycle became involved in the accident. Three of the vehicles caught fire upon impact due to the speed of the collision.

One party was dead inside their vehicle by the time paramedics made it to the scene. Another was ejected and died due to their injuries. A third one was quickly taken to the hospital but died while there. Several people received serious injuries due to the accident.

Police closed down the northbound side of the freeway so that they could investigate the accident.

We extend our sincerest condolences to you and your loved ones during this time if you have lost somebody close to you in a horrific accident that you believe could have been prevented. These accidents happen far too often on our roadways as a result of negligent drivers who are not looking out for the best interests of others.

When drivers choose to speed or engage in other negligent actions, parties become injured or lose their lives. You might be able to bring a claim against a negligent driver for aspects like medical bills, lost wages, funeral costs, and more.

At the Los Angeles Injury Group, we want to stand by your side as you work toward the compensation you deserve during a difficult time of grief. Call us for more information on how we can help at 310-954-7248.