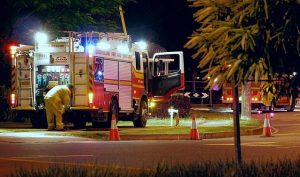 Sacramento, CA (October 3, 2018) – On Wednesday, October 3, two people were injured in a car accident when the vehicle they were in crashed into a water main at 65th Street and Broadway.

The accident took place right at the intersection around 3:45 a.m. There were three people reported in the vehicle at the time.

Responding emergency medical teams rushed two passengers to the hospital who sustained serious injuries. The accident was so severe that the intersection was flooding for over an hour.

Police are still investigating the circumstances leading up to the crash.

Vehicle accidents on our roadways happen for a variety of reasons, some of which include driver error by those involved to adverse conditions on the roadways and more. Police will respond to the scene so that they can determine how quickly the driver was traveling at the time, whether or not drugs were involved, if there were mechanical issues, and more.

If it has been decided that somebody acted in a negligent way that caused your accident, you will be able to move forward with a personal injury claim against the at-fault party. You have the right to receive a variety of damages such as medical expenses, lost wages, and more.

We want to help you hold a party responsible for the damage and turmoil that they have caused in your life. Every year, people in California are injured in serious accidents and wonder how they will move forward with a claim. You don’t want to handle your claim alone, as you could miss out on opportunities for compensation or miss deadlines that you were not aware of. Call an experienced attorney who can help you every step of the way at the Los Angeles Injury Group. We are here for you, so contact us today at 310-954-7248.