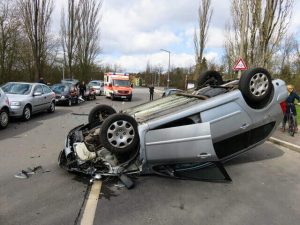 Sacramento, CA (August 13, 2018) – Two people suffered injuries in a Monday rollover crash in Sacramento.  The crash occurred around 6:00 am in the southbound lanes of the Interstate 5 Freeway.  The California Highway Patrol responded to the crash scene.  There, they found one person trapped inside of the vehicle.

California Highway Patrol has not identified either of the injured victims.  Few details are known regarding the specifics of the crash, including how it occurred and whether any other factors such as speed or impairment might have caused the wreck.  CHP is still investigating at this time.

Being involved in a car accident is never easy.  At a minimum, innocent accident victims must deal with the inconvenience of property damage.  At a more serious level, accidents involving injury can have a major impact on your life.

Rollover accidents such as this one can produce catastrophic injuries, including death.   At this point, it is too early to speculate as to the cause of this crash.  While police continue to investigate, we hope for the quick and full healing of those injured in the wreck.

If you have been the victim of someone else’s negligence, you have legal rights.  In California, a negligent driver can be held civilly responsible for your damages, including lost wages, medical bills and pain and suffering.   In order to maximize the value of your case, you should speak to a Southern California personal injury attorney right away.

There are too many pitfalls with trying to handle such a claim yourself.  Without the experience needed to determine the value of your case, you risk accepting a settlement that is too low and does not fairly compensate you.

To speak with one of our Los Angeles personal injury lawyers at the Los Angeles Injury Group, call us today at 310-954-7248.  We offer free consultations and are standing by waiting for your call.