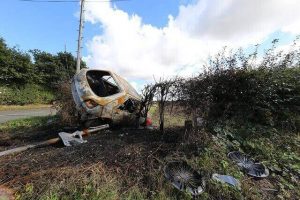 The Oxnard Police Department received a call about a domestic dispute within the Terrace Estates neighborhood. They arrived at the location and found that a black Chrysler was pulling out of a driveway. Officers attempted to stop the car but the driver did not stop. A pursuit ensued but quickly stopped in the area of Rose Avenue when the speed limit was exceeded. Officers did not want to risk the lives of others on the roadway.

The Chrysler tried to get off at the exit but crashed while trying to do so. Officers found the vehicle upside-down in an embankment. There were six people inside the crash. One adult and one juvenile were taken to the hospital with injuries, but their names have not yet been released.

Arrests were made involving four adults. An investigation continues at this time.

Are you a passenger who received serious injuries due to a rollover accident? Perhaps a negligent party was disobeying the rules of the road and, as a result, you have been injured or a loved one has been hurt or lost their life. You have many options when it comes to recovery during this time as we work to prove that one party has acted negligently.

Call us for more information on how we can play a role in your claim at the Los Angeles Injury Group. We are waiting to hear from you at 310-954-7248.