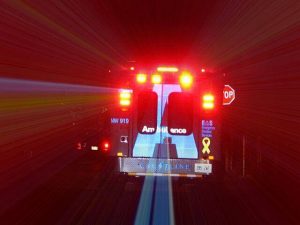 Oakdale, CA (August 8, 2018) – A head-on collision on Oakdale produced tragic results on Tuesday.  According to reports from the California Highway Patrol, a two-car collision occurred in the 5311 block of Patterson Road around 7:00 pm on Tuesday evening.  The cars involved in this crash are a Dodge Durango and a Toyota Echo.

At this time, it is believed that the Durango collided with the Echo.  No reason is given as to why or how the collision occurred.  The impact from the crash caused the Echo to go into a nearby pond.  The vehicle then became stuck in the water.

Police, fire and rescue officials all responded to the scene of the crash.  Emergency workers identified one person with critical injuries.   Despite lifesaving efforts, that person was pronounced dead at the crash site.  Authorities have not identified the deceased and it is not clear whether they were in the Echo or the Durango.

Traffic in both directions of the roadway was shut down while the investigation was ongoing.  Police have not released any additional details regarding the crash.  An investigation into the collision is ongoing.

Our thoughts are with the deceased person in this tragic Oakdale accident.  Further investigation is needed to determine the cause.  Police will consider all factors leading to the crash before determining which driver was at fault in this instance.

A fatal accident is one of the most emotional and gut-wrenching experiences that loved ones will ever face.  It is impossible to plan for such a sudden tragedy.  In the aftermath of the crash, family members find themselves struggling just to make day to day decisions while coping with the loss of a relative.

During these times, it is important to obtain legal representation.  If your family member was killed due to someone else’s negligence you may have the right to bring a wrongful death claim.  In California, a wrongful death claim is filed on behalf of the deceased person by their next of kin.   The next of kin can recover certain damages as compensation for the loss of their family member.

We offer free consultations for all Southern California wrongful death cases.  To speak with an attorney today, call us at 310-954-7248.