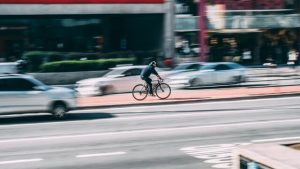 Norwalk, CA (August 11, 2018) – A man walking with his bicycle was critically hurt in a hit and run on Friday.  The collision took place around 2:00 am.  The 41 year old man, who has not been identified, was walking near Imperial Highway when he was struck by a vehicle.  It appears as though the man was walking in the middle of the roadway.

The driver fled the scene following the crash.  Although police were unsuccessful at initially apprehending the driver, he was later arrested.  The driver has been identified as 41 year old Nicola Kerr.  Kerr has been charged with felony hit and run.

Meanwhile, the pedestrian suffered serious injury in the crash.  He was transported to a hospital with serious, life-threatening injuries.  There is no further update on his condition.

An investigation into the accident is ongoing.

The Los Angeles area is certainly no stranger to pedestrians.  Many people choose to walk from place to place instead of dealing with heavy traffic in the city.   When a pedestrian is involved in an accident, the results are often severe and catastrophic.

Drivers must be alert at all times for pedestrians.  This means avoiding distractions such as texting while driving and following all traffic laws, especially in congested areas.  Taking basic precautions while behind the wheel can help to avoid tragedy.

Pedestrians, meanwhile, are also expected to observe all laws.  A pedestrian should exercise care for their own safety at all times.  This means crossing the road only with a traffic signal, walking in marked areas such as crosswalks and paying close attention to traffic patterns.