Los Angeles, CA (April 25, 2019) – A high-speed chase lead to a devastating crash at 9th and Olive streets. The incident occurred on April 24th. At least one person was injured as a result of the crash.

Reports claim that officers chased an SUV on the 60 Freeway in the Hacienda Heights area. The SUV reportedly reach speeds above 100 mph through the East Los Angeles interchange. After getting off of the freeway, the SUV eventually collied with an Acura sedan at 9th and Olive streets.

The SUV driver attempted to flee the scene of the crash but was later apprehended by authorities. The driver of the Acura sedan was immediately transported to a hospital for medical care. Authorities are currently investigating the situation.

We send our condolences to the victim and their family members involved in this accident, and we hope for their complete recovery.

At least 40% of California motorists have admitted to using cellular devices while driving. In turn, California has seen a 28% increase in auto accidents since 2013. Disturbingly enough, California accounts for 12% of the nation’s total car fatalities. 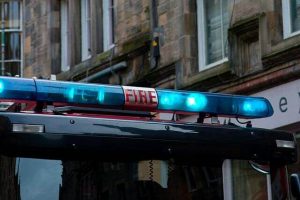 Irresponsible drivers are serious threats to other motorists. Drivers that are preoccupied with their phones, radios, or rubbernecking can cause you severe personal harm or worse. If you find yourself the victim of someone’s recklessness, contact a professional Calfornia car accident lawyer.

The Los Angeles Injury Group will stop at nothing to win the proper compensation you deserve. Our team of dedicated lawyers is more than capable of obtaining justice for all of our clients. If you or a loved are in need of a Calfornia car accident lawyer, contact us at 310-954-7248.