Three other individuals were also injured in the aftermath of the devastating crash. The white sedan that crashed into the four-story apartment caught fire and was promptly extinguished by firefighters.

The driver of the sedan and a 55-year-old male passenger were transported to a hospital that listed them as being in critical condition. Brown, who was sleeping with her 4-year-old daughter, perished from fatal injuries as a result of the crash. Three other unidentified people were injured from the crash but the cause of the crash has yet to be determined.

The Los Angeles Police Department’s South Traffic Division is currently investigating whether alcohol or drugs played any role in this horrific situation.

We would like to offer our deepest condolences to the family of Nicole Marks Brown at this time. Our thoughts are also with the injured victims and their families in hopes of a full recovery. 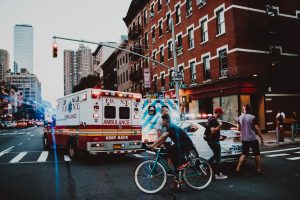