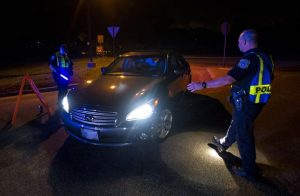 Los Angeles, CA (July 27, 2018) – An innocent bystander was the victim of a two-car wreck in Los Angeles Thursday night.  The crash happened at 9:15 Boulevard in the 3000 block of South Sepulveda Boulevard.  At that time, a Toyota Rav4 and Ford Expedition collided in the intersection of South Sepulveda and National Boulevard.  The Ford then crashed into a light pole as well as a bus bench before hitting the bystander.  Authorities believe that the bystander was waiting for a bus at the time of the collision.

The bystander died at the scene.  A subsequent police investigation led to the arrest of the Expedition driver on suspicion of driving while impaired.  Los Angeles Police are still investigating the crash.  Officers have not released any additional information and have not identified the deceased individual.

Driving under the influence is a serious problem, both in California as well as nationwide.  An impaired driver puts everyone else at risk.   Impairing substances include alcohol but also include drugs, both illegal and prescription.  Driving under the influence of prescription drugs, such as painkillers, is becoming a more common problem.  In this case, the source of the allegedly impairing substance is unknown.

A person who drives while impaired is legally responsible for injuries suffered to others as a result of their negligence.  DUI cases often present special challenges and require the examination of technical evidence.  In some cases, expert witnesses are necessary to prove impairment.

If you have been hurt in a Los Angles DUI crash, you need the best representation that our area has to offer.  At the Los Angeles Injury Group, our team is familiar with DUI laws and DUI accident cases.  We have helped many victims in their recovery from these catastrophic crashes.