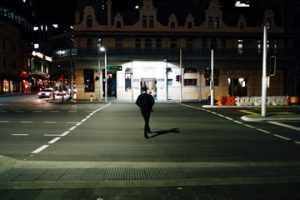 Los Angeles, CA (July 30, 2018) – A hit and run in the Watts neighborhood left a woman dead Sunday in Los Angeles.  Los Angeles Police responded to the scene at Imperial Highway and Success Avenue just after 2:00 am.  There, they found the 60-year-old woman lying in the roadway.  Medical treatment was given but the woman succumbed to her injuries.  No further identification has been provided.

The driver fled the scene shortly after the collision.  Witnesses reported seeing the car make a U-turn before police could arrive.  LAPD is still looking for the hit and run vehicle as of Monday morning.  Police believe that the car is a white sedan or small SUV.

Our thoughts go out to the victim of this hit and run crash in Los Angeles.  By law, drivers are required to remain on scene following a crash.  Sometimes, however, a driver attempts to evade responsibility by leaving the scene.

In these cases, eyewitness reports and physical evidence, such as vehicle damage, often lead to officers locating the vehicle later.  In some cases, the hit and run driver is never located.  If the driver cannot be located, the injured victim’s legal approach to the case must change.

Fortunately, most California insurance policies provide what is known as uninsured motorist coverage.  With uninsured motorist, the driver is protected in the event that they are in a crash involving an uninsured driver.  The same applies to a hit and run crash in which the other driver is never located.   In these crashes, your uninsured coverage will kick and help pay compensation for your injuries.

If you or a loved one have been hurt in a Los Angeles hit and run, you should contact us at the Los Angeles Injury Group today.  Our experienced attorneys know how to help you through these difficult cases and ensure that you can put your life back together.