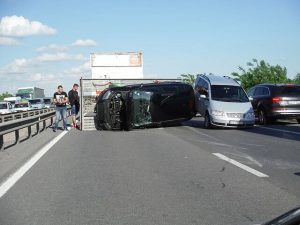 Elk Grove, CA (August 30, 2018) – One person lost their life and several others received injuries in a deadly DUI accident in Elk Grove. The accident happened on the Interstate 5 Freeway.

The man who lost his life in the incident was identified as Colin Mulhern. One of the injured individuals was identified as Patrick Carney. At the time of the incident, Mulhern had allegedly been driving a van with a trailer attached to the back. 27-year-old Eunique Lewis struck the trailer being towed with her vehicle, which forced the van to flip over near Lambert Road.

Mulhern suffered fatal injuries due to the crash and died at the accident scene. Carney was rushed to a hospital and has been listed in critical condition. He remains in a coma at this time. There were five other passengers in the van, all of whom received various injuries and were taken to the hospital for treatment.

Reports say that those in the van are touring musicians. Lewis was taken into custody and arrested for driving drunk at the time of the accident as well as a couple of other charges.

The investigation into the matter is ongoing at this time.

Drunk driving accidents can very easily lead to traumatic results, especially when a driver is acting in a reckless fashion on our roadways. Individuals who make the decision to drive drunk could easily face criminal charges, which will be one of the determining factors in your case as you are working toward compensation.

We want to help you gather all of the evidence you need during this difficult time as you attempt to prove your case against a driver who acted negligently. If an accident led to the death of a loved one or serious injuries, you might have a case and need a legal advocate on your side who will listen during this time. Call us at the Los Angeles Injury Group for more information at 310-954-7248.