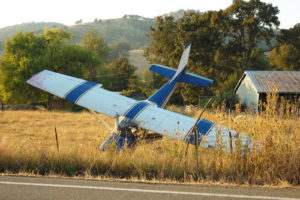 Descanso, CA (August 27, 2018) – A small plane accident occurred in a rugged part of Descanso near Tule Springs Road. A search and rescue team quickly came to the scene of the incident.

Two men were found dead at the location. The deceased parties have since been identified as 77-year-old David Derby and 36-year-old Ryan Willis. On Wednesday evening, the plane left the station but never returned as scheduled. They couldn’t be reached by radio, which is when they were reported missing.

The crash site was found after rescuers observed a steep descent on radar. When Debry and Willis were found, they were immediately pronounced dead.

Derby had been the pilot at the time of the incident. The crash is being investigated by the National Transportation Safety Board and FAA.

Though plane accidents are not as prevalent as car accidents on our roadways, they are still extremely serious accidents when they do occur with a high rate of death. If someone has been hurt or killed in one of these accidents, they are able to move forward and receive compensation during this time.

Many plane accidents happen every year for the following reasons:

Let us stand by your side if you or someone you know has been involved in one of these accidents. Call us for more information at the Los Angeles Injury Group at 310-954-7248.