The warm weather of the summer continues into the fall in Southern California, and with it comes autumn boating weather. Tragically, this also means boating accidents along our region’s waterways.

Just last month, a recreational boat carrying 10 people and another vessel with six people on board collided head-on along a well-traveled stretch of the Colorado River, the Mohave County, Arizona Sheriff’s office said. Nine passengers were injured with two in critical condition. Three people aboard the boats died and one is still missing. Authorities on the Colorado River are still determining the cause of the fatal crash.

While the origin of last month’s motorboat crash on the Colorado River still isn’t fully known, The American Boating Association says that about 15% of all fatal boating crashes in the United States involve alcohol, making it the leading cause of all fatal boating accidents. Similar studies find that the effects of alcohol are more pronounced when operating a boat as opposed to operating a vehicle.

Drinking While Operating a Boat in California

This is mainly because of the several different stress factors (vibration, wind, speed, engine noise, and wave action) that aren’t present in other vehicles. What adds to the danger is that when boaters consume alcohol, they lose their ability to judge how impaired they are and they become overconfident. They then end up engaging in more risky behavior. 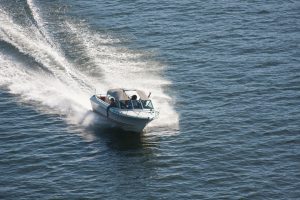 According to California boating laws, people operating a vessel, as well as the vessel’s owner, are often required to file a written boating accident report with the Department of Boating and Waterways. This written report is required when a person dies, disappears, or is hurt and needs medical treatment beyond first aid. A written report is also required when total damage to the boats and other personal property involved in the accident valued is valued at more than $500, or there is a total loss to a boat.

At Los Angeles Injury Group, our experienced attorneys have helped clients win cases for those who have suffered injuries or for family members who have lost loved ones in boating accidents. We understand how life-altering these losses can be, which is why we fight for our clients until they receive proper compensation. If you, or someone you love, received injuries or died as a result of a boating accident, call (310) 954-7248.