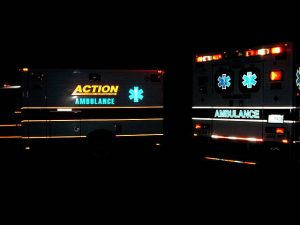 Canoga Park, CA (August 2, 2018)  – An accident in Canoga Park, California left five people injured Wednesday evening.  At around 8:00 pm several vehicles were involved in a crash at the 7200 block of Canoga Avenue, near Sherman Way.

Authorities say that the crash occurred when an ambulance and another vehicle collided.  There is no word on how the collision took place or which driver is at fault for the crash.  Several people were injured in this crash. In total, five individuals were transported to the hospital for treatment.  Their injuries are not believed to be life-threatening.

This crash is still under investigation.  Police have not identified those injured in the crash nor have they stated whether they intend to issue any charges.

We hope that those injured in this Canoga Park crash have a full recovery.

If you have been hurt in a California car accident, you will probably receive a call from an insurance adjuster immediately following the crash.  The adjuster will want to speak with you and will take a recorded statement about the events leading to the crash.  If the company decides to accept liability for the crash, they will offer you a settlement.  Such initial settlement offers may seem attractive because you want to put the entire ordeal behind you.  However, they are not usually in your best interest.

The insurance company wants to maximize its profits.  By settling quickly, they get the case off their plate with a small payment.  The company makes money and you could be left with future expensive medical treatments and pain.

Once you settle and sign a release, you have no further legal rights with regard to your personal injury claim. It is always wise to consult an experienced Southern California car accident lawyer before signing anything or talking to the insurance company.

At the Los Angeles Injury Group, our attorneys take the lead for you.  We speak with the adjuster for you and we will fight to get a fair settlement for you.  If the case cannot settle, we are not afraid to take the fight to the courtroom in order to obtain compensation for your injuries.

We offer free consultations to all California car accident victims.  To speak with one of our attorneys, call us today at 310-954-7248.