Bodega Bay, CA (October 16, 2018) – Ryan Moore, 35, of Santa Rosa, California was arrested Sunday, October 14, in connection to a vehicle pursuit that ended in a deputy crashing into a home in Bodega Bay, California. Local authorities reported that the Sonoma County deputy pursuing 35-year-old Ryan Moore sustained injuries as a result of the accident. 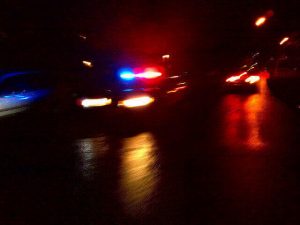 Based on the initial police report, the Sonoma County Sherriff’s office received at least five reports about stolen generators in the community of Bodega Bay two weeks prior to the crash. The Sonoma County Police Department launched an investigation that led them to Duran Beach Campground, where officials witnessed suspicious activity involving a white sedan and a grey Honda Pilot. The deputies, had reason to believe the suspects in the Honda had just committed thefts in the campground which initiated a traffic stop.  The Honda took a left turn onto Highway 1 in Bodega Bay. The driver of the Honda failed to stop which led a deputy on a high speed pursuit northbound through Bodega Bay.

According to investigators, the deputy in pursuit lost traction around a curve and went off the roadway and hit a home in the 600 block of Highway 1 in Bodega Bay. The sheriff’s office reported, the deputy patrol car was lodged in the front of the home. The deputy was able to get out of his car, exit the house and call for assistance. The home was an Airbnb rental that was occupied by three sleeping tenants from San Francisco. Following the collision, as second patrol deputy forced his way through the front door and got the people in the house out, as smoke enveloped the patrol car and the home caught on fire. Local fire departments responded to extinguish the fire and the tenants were put up in a local hotel. State park rangers discovered the Honda Pilot abandoned at a construction site in the 300 block of Bay Vista Lane in Bodega Bay. Investigators have determined the Honda was stolen out of the Santa Cruz area. Emergency personnel transported the deputy to a nearby hospital for evaluation. The injured Sonoma County Deputy remains in a local hospital with serious injuries but is expected to make a full recovery.

Police initially reported that the suspect failed to cooperate with authorities and, prior to the collision, had been driving recklessly. Depending on the results of the investigation, the injured victims may be entitled to compensation to help alleviate inconveniences ranging from medical bills to vehicle damage.

We extend our most heartfelt thoughts and send best wishes to the deputy that was injured in the pursuit and to everyone else who was affected by this crash and wish them swift recoveries.

If you or a loved one have been injured in an accident that was caused by the negligence of the other driver, you may be entitled to compensation for your injuries.  Contact the skilled attorneys at the Los Angeles Injury Group to discuss your claim today at 310-954-7248.  .