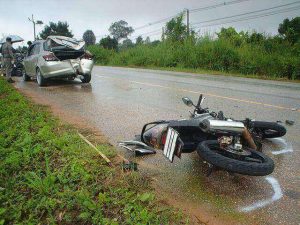 Arroyo Grande, CA (October 11, 2018) – On Tuesday, October 9, a 49-year-old was struck and killed in a motorcycle accident that took place on Highway 101 near El Campo Road. The accident happened around 6:30 a.m. on Tuesday.

The accident happened when a deer ran out onto the road. A 54-year-old man from Orcutt was heading south in the area when he struck a deer, which caused the animal to be thrown into the next traffic lane directly into the path of a Harley Davidson motorcycle. The motorcycle rider, Johnny Dale Trujillo, struck the deer and was then ejected from the motorcycle.

A Toyota Prius was passing on the highway and wasn’t able to stop in time when Trujillo appeared in the road. Trujillo suffered fatal trauma as a result of the accident.

The Prius driver was identified as 67-year-old Kathryn Sue Hoag. She was not injured in the accident.

Police are still investigating at this time.

Motorcycle accidents take place far too often on California roadways, causing serious injuries and fatalities when they do occur. If you or a loved one have been involved in a motorcycle accident, you have many rights.

The reason why motorcycle accidents can be so deadly is due to the fact that motorcyclists have very few protections on our roadways. When they are ejected from a motorcycle after somebody hits them in an accident, there is a high chance for broken bones, head injuries, organ damage, and more.

If you have lost somebody close to you in one of these accidents, you might have a chance to receive recovery through what is known as a wrongful death claim. These claims can be especially helpful for family members to receive aspects like lost wages, medical bill repayments, funeral costs, and more after they have had to say goodbye to a loved one too soon. We are here for you during this difficult time at the Los Angeles Injury Group. Call us today to find out how we can assist you at 310-954-7248.